It’s a new year and with it comes new opportunities, new directions and new friendships. Our year started in Hollywood-fashion, with Sr Filomena (Timorese Coordinator), Bony (intrepid translator and natural showman) and Tino (dental therapist extraordinaire) taking a turn in front of the cameras to showcase our program in a 360° Virtual Reality documentary. Thanks to our mate, Daryl Mills, who, even when he is not living in TL, is still thinking of us!

An serendipitous start to what promises to be an exciting year. This year we are teaming up with the Bendigo Maubisse Friendship Group to improve dental services to the community in the subdistrict of Maubisse, which lies to the south of Dili in the mountains. Up to now, our program has only managed to visit Maubisse once a year; we are hoping that this partnership will significantly increase our capacity to deliver treatment and to better mentor and support the two dental therapists who currently work in the hospital, Armando and Ricardo.

We have 5 teams this year and apart from Maubisse, we will be heading out to Atauro (Dr Wayne loves those huts at Barry’s), Oecusse and Railaco, with the rest of the itinerary to be unveiled by The Boss (Sr Filomena) as the year unfolds. First team kicks off in April. Watch this space!

Team 5, headed by Dr David Digges, arrived home on the weekend, safe and sound. We await their report with much anticipation, however, it may be awhile – we received an unusual call from our lovely Sr Filomena on the day that the team left. The team worked very hard, she reported, and were very tired. What dedication! Well done team and welcome home!!

Team 3 returned to Australia last week following a productive fortnight. This was team leader Blanche Tsetong’s tenth trip to TL, so for her, this trip had a celebratory glow from the outset!

The team also comprised Dr Wayne Pearson – on his 8th trip – and Sally Stephens – already on her 3rd trip in one year! The team was joined by Aida in the first week and together they treated patients in Maubara Clinic, Pauirobo Primary School and Loes High School. Blanche and Aida tag-teamed a chair, while Sally and Wayne made a dynamic duo. The team were particularly impressed with the kids’ teeth at Loes. This school had last been visited by one of our dental teams in 2010, however, it was also one of those schools targeted by a oral health education workshop run in 2008 by Sandra Meihubers and Timorese dental therapist, Elisabeth, as well as a toothbrushing program run by Sr Filomena. The team was pleased that the fillings that the dentists had placed were still there – good quality work – but they were even more impressed that the oral hygiene and decay rate had dropped significantly – evidence of the importance of education. Plans are afoot for Aida, Blanche and Sr Filomena to do a refresher workshop next year and will involve not only school teachers, but also local doctors and nurses.

Aida’s skills in diagnosis have improved dramatically and she is now a dab hand at extractions (although she says that her confidence diminishes without the team’s ‘safety net’). We are now working on increasing her experience with fillings in the front teeth. She is a great clinician and the team thoroughly enjoyed their week with her.

The first week was plagued by team erosion – Sr Filomena is now the Big Boss at Maubara and so she had to attend several meetings over the week; Sally was struck by a lurgy which took her out of active service for a day (although she spent that day doing more stocktaking than resting!), nevertheless, the team still managed to finish treating all the students in Loes, in part due to exceptional teacher management. 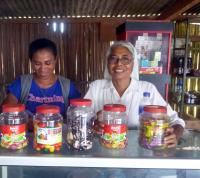 The end of the first week marked the 25th anniversary of Sr Filomena’s entry into the Carmelite order. This extraordinary woman has been serving the Timorese people for a quarter of a century and she remains humble, joyous and full of love and energy. All who have participated in the program feel truly privileged to have spent time with her. Congratulations Sr Filomena! Felicidades! Parabéns!

Week 2 was spent in Letefoho subdistrict, where the team worked again in their room-with-a-view under the imposing Letefoho church, and visited the nearby villages of Lakau and Lauana. It was a busy, tiring, amazing week. The team arrived in Letefoho just in time to witness the celebration of the Bishop’s inaugural visit – they spent half a day immersed in the spectacle of the crowds, the traditional music and dancing, soaking up the fervour. Once mass was over, the crowds progressed to the dental clinic – the team worked late that night.

For the rest of the week, the team was joined by the ebullient Sr Bernadette, who undertook the tasks of patient registration, catering, drug, sticker and toothbrush dispensing, and crowd control – the team was Organised! Her happy company lifted our hearts the entire week.

The visits to Lakau (8.6km) and Lauana (17.8km) were each an hour’s worth of 4WD adventures away from Letefoho. Lakau was extremely windy, perched on the side of a mountain and the team worked in a little bamboo building with a metal roof that threatened to take off with each gust. Lauana, at a little lower altitude, was surrounded by towering Madre de Cacao trees; the church at the top of its steep streets commanding beautiful views over the valley.

Armando felt that he urgently needed more tuition in extractions and reasoned that the 3 hours they spent with the team was worth the 8 hour round trip from Maubisse. It is such dedication that inspires and motivates us in the TLDP. It was a fabulous treat for the team to reconnect with all our Timorese dental therapists in one trip, as well as to meet a new one! 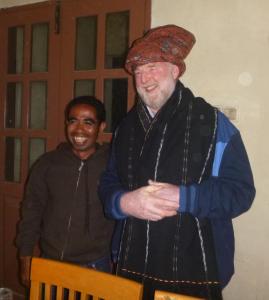 The team had a great time in Letefoho. Despite the bracingly cold showers in 12 degree temps (the Fathers are hardcore!), our host, Father Elio, was great company and the hospitality of his crew was second-to-none. Now that he has built a new guesthouse, larger teams will also be able to experience this beautiful area with it’s friendly people.

As always there were the equipment issues particular to working in TL – leaking foot pedals, out-of-control algal growths, the mysterious and inexplicable disappearance of an oil cap after leaving it aside for 60 seconds – but the team took it all in their stride. It was a successful trip – Team 3 treated 516 people, did 370 examinations, 393 extractions, 186 fillings and 169 preventive treatments. Well done team! Thank you to the Maubara crew – Sr Cecilia, Sr Filomena and Idalina; the Letefoho crew – Fr Elio, Fr Ino, Fr Eduardo, Fr Alberto, Mana Lulu and Sr Bernadette; and our Dili crew – Daryl – for making this trip so memorable.