Team 4 was plagued by problems before they had even left Australian shores. Team numbers fluctuated wildly with each loss and gain of dentists and dental assistants, wrong flight bookings were made, translators got other last-minute jobs, supplies went astray or disappeared into thin air!  But the team pulled it together and they did a great job. The team’s core comprised team leader, Dr Peter Shakes, Timorese dental therapist, Nico Pires and Timorese dental assistant and translator, Ana Paula DST Salgado. They were  joined by Dr Andrew Frame and Dr Ashley Freeman during week 1, and Dr Mary Tuituinnik (her 2nd time this year – thank you Mary!) for week 2.

The team spent the first week in Atsabe, a town a few slow/bad/nervous-road hours beyond Letefoho. This was the first dental team to visit this town and as Nico’s travel experience ended a couple of villages short of Atsabe, the last bit of navigation to the town was a little tricky.  They got there by the end of Day 1 and were put up in the grand, but dilapidated house of Father Arnauldo, the Parish Priest. (Pic: Nico giving toothbrushing instruction to the school kids in Atsabe.)

The team treated the community and school kids for 4 1/2 days, however, trouble with the suction unit meant that filling options were limited during this trip. The suction unit limped along for 2 days before packing up all together – the absence of this vital piece of equipment would have tested the patience of a saint – it makes everything harder in an environment where providing quality treatment is already difficult. Nevertheless, the team was on fire. Ashley quietly plugged away at the work, Andrew wowed the locals with his beautiful fillings, Nico served up dental hygiene instructions to the masses and Ana Paula simultaneously assisted 4 clinicians, AND translated for the entire team. The team loved this week  and this new location (they have put dibs on it for next year!). They all agree that despite the cold shower water and the warm beer (no refrigeration here), the hospitality, pleasant climate, and the stunning views from their workplace have pushed Atsabe into their No. 1 spot in TL. (Pic: the stunning views from the ‘clinic’)

Changeover weekend. Andrew and Ashley headed off. Ana Paula and Nico headed home for the weekend. Mary arrived. Peter and Mary paid a visit to Fatuhada, the Carmelite HQ in Dili, where they were delighted to run into Sr Filomena, our long-time coordinator and great friend, who is now running things up in Oecusse. Mary was also able to catch up with Sr Delfina, who the TLDP hopes to sponsor if she manages to get into a dental training program. Peter spent Sunday running around changing over gas bottles – he learned the hard way that there is not a Swap-n-Go at every gas station like at home. LPG gas is only sold at very specific locations in Dili….and not always. Like many things in TL, everything is just a little harder to get done. (Pic: The team in Atsabe with Father Arnauldo and his team)

Week 2 the team was back to the grindstone. The driver we had hired for the second car failed to show up – he got a better paying job – so Sr Joaninha, head of the clinic in Maubara, stepped into the breach. Despite only having learnt to drive earlier this year, she made short work of the difficult 90 min drive to Lebutelo, and she made an excellent scrub nurse as well! (Pic below: Ana Paula, Sr Joaninha, Nico and little Marco at Maubara Clinic)

Thankfully, another driver was found for the rest of the week, as the team made several trips up and down the treacherous coast road to the west of Maubara. Despite being sealed, the road has several sudden, unmarked and unexpected drops, as well as large washouts leading to the cliff.  The many broken barriers (separating the road from the sheer drop down into the ocean) are silent reminders that this road is not for the unwary or the foolhardy.

The team spent Day 2 in Caicasa School, which Peter’s team had visited a year ago. At the time the school had funding for a feeding program, and the team was impressed by the children’s general and dental health. The feeding program managed to feed 194 kids for only USD 50 per day; unfortunately the funding ran out April this year.

They  also visited Faulara; the road to this village is terrible – the last hour was spent entirely in 1st gear. The team was disappointed as there was a lower-than-expected attendance to the clinic, as it coincided with the official opening of a new police station, with speeches and free food. The team ‘only ‘ saw 180 people that day (these are high achievers). The last 2 days were spent at Loes Junior school and Paurobo Primary School. The team was very busy indeed! They worked in 5 different locations that week, which means 5 times of unloading, setting up, breaking down, and reloading over 300kg of equipment. That’s a lot of heavy lifting! Mary, Peter and Nico worked seamlessly together, like a machine well-oiled by Ana Paula’s presence – for the second week in a row, she performed all clinical assistance, translating, and sterilising duties! 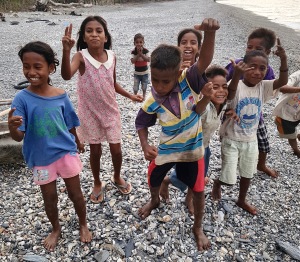 The team treated a total of 1154 people over the 2 weeks. They extracted 557 teeth, restored 82 teeth, cleaned 11 sets of feet and did 15 preventive treatments, despite having almost no suction and only one dental assistant between all the dentists. Adaptability! That’s what we like! Well done team!!!

(Pic: the everlasting enthusiasm of the kids)