The team’s first week was spent in the Maliana area, which is in the far west of TL. The road between Maubara and Maliana is also the road to Indonesia; so like the Pacific Highway between NSW and QLD, it is super busy. It is also affected by landslides, rockfalls, subsidence and erosion – especially after the wet season – so the going is often slow. Nevertheless,  after  gearing up at Maubara, the team made such good time  that they were able to stop enroute in Balibo for a pizza – quite an exotic experience! (Pic: The team at EBC Raifun School)

The team had to do without Nico for the first week, as he was on paternity leave. His wife, Antonia, had just given birth to a son the week before. Congratulations to them both!!!! 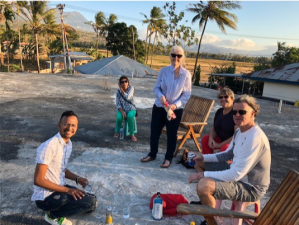 Maliana is Bony and Isa’s home town. This meant that the team was treated like royalty during their stay!  Restaurante Maliana, Isa’s mother’s restaurant, kept them well-fed throughout the week, and frankly spoiled them – delivering food to their accommodation when they thought that the team might be tired after work.  The first 1 1/2 days were spent treating patients at the base hospital, and mentoring José Soares, the local Timorese dental therapist; the next 1 1/2 days were spent in EBC Raifun School, a combined primary and junior high school that has so many students that it has to ‘hot desk’ morning and afternoon classes in order to fit in all the students!(Pic: Rooftop ‘cocktail hour’ in Maliana)

The last 2 days of week 1 were spent in the village of Cailaco, an interesting 1 hour drive from Maliana – the team had to cross a couple of ‘quaint’ bridges and negotiate a mud-crossing to get there! The people of Cailaco had never seen a dentist before, so the team was inundated with work. David said, “it was hard yakka – lunch on the run Thursday, and only a brief respite on Friday”. Week 1 was a baptism of fire for Henry, who despite being totally exhausted by the end of the week, intends to return next year!

As usual, changeover occurred during the middle weekend. The team farewelled Bony, but welcomed Nico back to the fold.  Henry and Liz departed, and Steph arrived. After a quick resupply of consumables in Dili, the team made their customary pitstop at Black Rock in Cameo Beach on the way back out to Maubara, where they would be working for the next week. .(Pic: In Cailaco – Bony, Henry, Isa, Liz, Ana Paula, Charmaine, 2 local doctors, David)

Monday to Wednesday was spent treating the children of Aipelo Bogoro School, in a very poor area in Liquiça district. Despite the presence of a government dental therapist who is responsible for this district, and only being an hour from the capital city, many of the children had never seen a dentist before. The TLDP were there at the request of the school’s principal. There was a massive amount of decay in the children’s teeth – the team extracted 226 teeth in those 3 days alone! Nico is an extremely hard worker and after only a little mentoring,  has become very competent with his extractions.  He was on fire those 3 days! It was a  real boon to the team to also have Ana Paula on board – an Australian-qualified dental assistant, who also speaks Tetum, is priceless. She and Isa sterilised, assisted and translated for the entire team, as if on roller-skates. 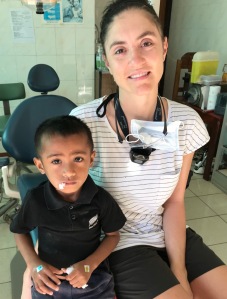 As always, the team was well-cared for by our beautiful friends, the Carmelite sisters. Each night they dined with the sisters in the local orphanage and got to spend time with the kids. Steph, in particular, was a real hit with the children, quickly gaining a new bestie, 5-year old Marco, who is quite new to the orphanage. (Pic: Steph and her bestie, Marco)

The last 2 days were spent at our Maubara base clinic treating the community, the Carmelites and the Orphanage kids. With a little more time on their hands, Nico was able to work on his weaknesses, attempting complex fillings with guidance from Charmaine and Steph. The team also carried out the necessary and every-present inventories and equipment maintenance.

The team got off lightly with equipment problems – only the suction unit malfunctioned this trip. This is the third time that this unit has kicked the bucket, but we are hoping to repair it again, as it is quite expensive to replace. Fingers crossed! At time of writing, we are still hopeful, but it is not looking good for our suction unit – unfortunately, it seems we may have to fork out USD2000 soon.

According to the team, it was a busy and wonderful 2 weeks. Henry and Steph did fabulously as first time volunteers and we are hoping that we did not wear them out too much! The veterans, Liz and Charmaine, also worked tirelessly, despite being a little under the weather towards the end of Week 1. The team saw 1261 patients, extracted 527 teeth, did 406 fillings, and 241 preventive treatments. Go team! 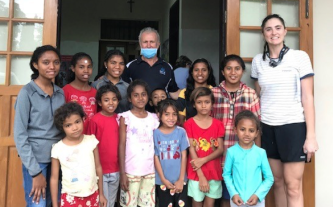 One of the delights of volunteering in TL is spending time with the local Timorese people – both working and hanging out with them is a real pleasure. The Carmelites are joy incarnate and are so caring and happy and helpful, while the young Timorese are so eager to learn, hardworking and congenial. Nico, Ana Paula and Isa are prime examples of Timorese youth – keen as mustard, full of grace, focussed on the future. (Pic: David, Steph and kids)