Apologies to our supporters for the tardy update, but there has been significant busy-ness this month for the TLDP team. Team 2 returned mid-June after a highly productive trip, which is only to be expected from the well-oiled team of Dr John Moran, Dr John Whyte and Ms Bella Miller. The last member of the team was, of course, Nico (Nicolau Tolentino Faria Pires), our recently contracted, hard working dental therapist, who has been chipping away at the work in Maubara. (Pic: Nico, John Whyte, Sr Filomena, John Moran, Sr Joaninha)

All teams carry a great deal of dental materials and equipment back and forth from TL and we rely heavily upon the goodwill of the airlines. It is not uncommon for each team member to carry 30 kg of goods into TL, without which we could not treat patients, or support all our mentored Timorese clinicians! Thank you Airnorth and

Sriwijaya airlines – we appreciate your support!

A trip to TL is never without a few hiccups, and this team proved to be no exception to the rule. The team battled enormous queues to catch their flight from Bali, were stymied by Citilink airline officialdom, which made them pay excess baggage fees for their 9 kg extra, and when they arrived in Dili, there was no one to meet them – our Rotary liaison had forgotten about them! By the time the team finally arrived at their Liquiça accommodation, they were exhausted! Thank God for Black Rock at Caimeo Beach – there’s nothing like a bit of good food and glamping to the sound of lapping waves to soothe away one’s travel woes. (Pic: Bella Miller, JM and JW at Black Rock)

Fully refreshed the next morning, there was a drop in to Maubara to gear up, say “Hi” to Sisters Filomena and Joaninha, and collect Nico, then the team was off to Railaco for the next 5 days. For this team, Railaco is like their second home – the indefatigable Father Bong and his merry men and women always provide a warm welcome. (Pic below: Old and new at Railaco, pic left: JW in his mini-surgery at Railaco secondary school)

The team set up clinic in number of places during this time. They spent the first day in Father Bong’s clinic at the Jesuit Mission, the next two days in the Escola Secundária Católica Railaco, Nossa Senhora de Fátima – the local catholic high school in the sister parish to St. Canice’s in Elizabeth Bay in Sydney and two days in Fahite primary school. The team was kept busy all 5 days and they were most ably assisted by Brother Luis in the high school, and a local Fahite lady, Fátima, who has made it her life’s purpose to improve life for the Fahite community. Fátima originally intended to join the ranks of the catholic Sisters in Timor, who make such a difference to people in the villages; however, after 2 years as an aspirant, she decided she could do more good as lay person. The team found her invaluable as a translator and dental assistant. (Pic below: Fatima of Fahite and JM with the view from the village) 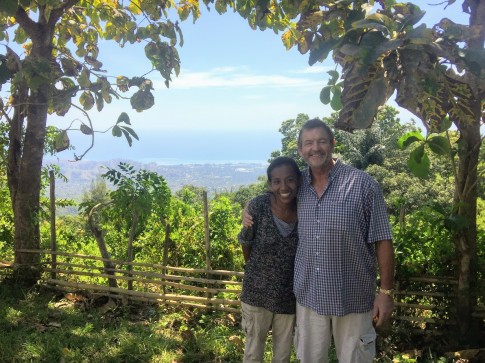 The team noticed a stark difference between the Catholic high school and the government primary school; the environment in Fahite was significantly poorer, with no lights, and large crevasses forming in the floors of the classrooms. This state of disrepair is unfortunately unexceptional in village schools across TL. Fahite, at least, has electricity, even though it was delivered through a single power socket. As always, though, the charm and warmth of the Timorese people, and their extremely well-mannered children, transcends their difficult lives.

In Fahite, the team were again faced with the unique Timorese myth that extracting an upper tooth leads to blindness. All of our teams have found that this belief is extremely difficult to dispel and it often leads to the patient declining treatment. Nonetheless, the busy team had plenty of work to do. John Whyte was the powerhouse of the team, John Moran switched between treating patients, triage and teaching Nico who, being a solid grafter, carried out treatment, assisted John and John, translated and reassured patients. Bella, as all our dental assistants do, attended to all of the clinicians at once, and so she probably worked harder than everyone else put together! At the end of their time in Fahite, the team was serenaded with the national anthem by the entire student body, and waved off by the happy and appreciative community! (Pic: JM restores a smile and extracts a promise from a happy customer!)

The team spent the final 3 days in Kasait Clinic, down the hill from Railaco and not far from Liquiça district. The clinic is fairly new and clean, so it is a real treat for the team to live and work in. Super-organised and helpful, Sr Eliza and her assistant, Manuela, ensured a steady flow of patients from the school and community, without the usual crowd of onlookers (a feat bordering on impossibility!), and provided invaluable assistance with translating, reassuring patients and administration. The second last day was a Sunday, a quiet day in a Catholic country, so with few patients, this enabled Bella to give Nico a much-needed refresher in infection control and gave the team some much needed downtime at Black Rock. (Pic: Curious kids in Fahite)

Nico was a hit with the rest of the team. They found him to be a diligent and highly motivated clinician, who is compassionate and well-mannered, who develops excellent rapport with patients and puts a great deal of effort into every task. That is truly music to our ears! We count ourselves very lucky to have found him. We only have two real issues – we have to break him out of some bad clinical habits that he has picked up along the way, and we still have to improve our communication – but all Timorese seem to soak up different languages effortlessly. Since putting him through one term of English lessons, Nico’s English has already improved greatly! This team put a great deal of mentoring time in with Nico, which has increased his skills and his confidence. With each team’s effort, he just gets better! (Pic above: Nico in training. Pic below: The team in Kasait with Father EJ, JM, JW, BM, Nico, Sr Eliza and Manuela)

The team suffered through the usual equipment issues that make working in TL a challenge – this time the other suction unit played up (our main suction motor was being repaired in the Sunny Coast), our slow speed drill units went on a go-slow industrial action and our autoclave developed disco lights. In addtion, one of the portable chairs developed a fault in which the back suddenly drops – no chance of falling asleep for our already apprehensive patients! Never a dull moment. I see maintenance in the future of the following team. Thankfully, the team’s exit was smoother than their entry and they managed to get home without incidence.

Altogether Team 2 examined 282 patients, extracted 222 teeth, did 313 fillings and 233 preventative treatments. A fantastic effort from a dedicated team. Well done! (Pic: the view from the Esplanada)

2 thoughts on “The Inestimable Value of Service”